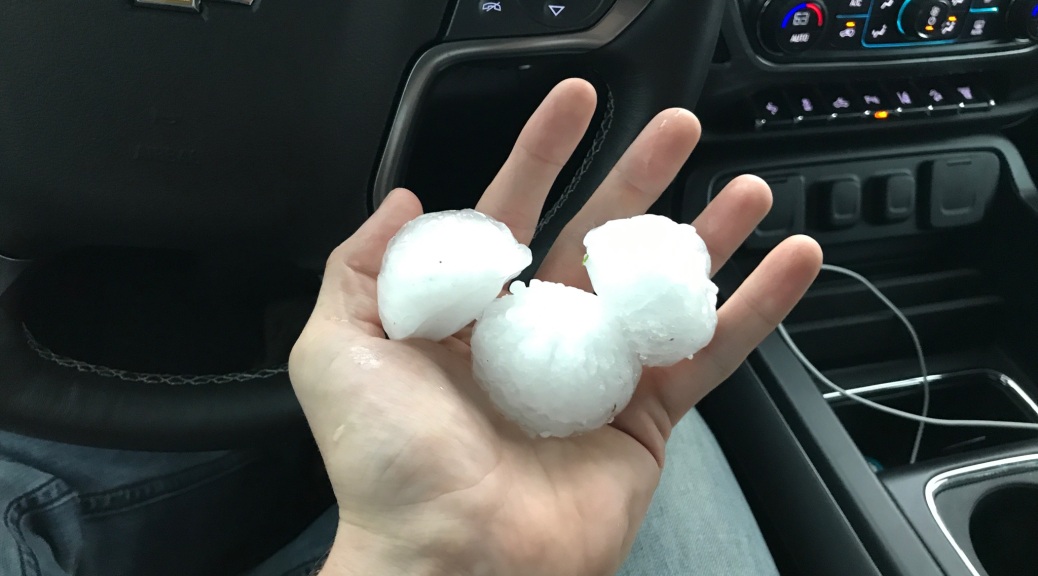 We had all been dreaming about the day that hail storm would come. When it actually hit, I remember expecting to wake up from a dream. In an area that has just been clobbered by hail it feels like an emp just went off or something. Everything is quiet save the scattered people in their yards that are in dismay over all the destruction that has happened to their material possessions. The hail that we were dealing with got to baseball size in some areas and I heard stories of people inside their cars, terrified as the hail slowly beat through their windshields and they would have to hold the glass up as a sort of shield to protect them from the weather. It’s ironic that the same event that causes so much horror to some can cause joy for others. As I canvassed neighborhoods that had be wrecked by hail just hours before, did I realize how much of a blessing this hailstorm was for a guy like me.

I moved to Denver about a month before the storm. I was just coming from working as a lift operator over the winter and has very litter money and much more debt. My plan was to work in Colorado to pay off my debt and save for my trip to Australia. Quickly I found 4 jobs and steadily did I start chipping away. I remember thinking about making a grand in a week and constantly setting my sights on that goal but never quite getting there. Money can slip away so easily if you’re not sticky disciplined with it. At this point in my life I was in lockdown mode spending maybe 100 a week and saving the other eight. It took going through more than a few of my major demons but after a month in CO I had my work ethic down to a science and I was on track to becoming what I wanted to create out of myself.

I had worked out a nice schedule working with the two brothers from Altitude. The way we had it worked out is that I would get 50 bucks every time I got a guy on the roof. Every time I cleared into a new tier I would get a $25 bonus on every lead that I had generated that week. The tiers where set to increments of 10 making it a $250 bonus. The first week I hit 4 leads, the second 7, and the third 10. I was feeling good about my progress and ready to keep building.

It was Monday afternoon when the hailstorm struck. I was just getting off from one of my other jobs as a delivery driver for a catering company. I was riding the bus near cores field when we were pelted with hail the size of grapes. I got a text from the guy that pays me with a picture of him holding three softball size hail in his hand. I met up with this guy and we ride out to an area that has just been destroyed by the storm. This is where I get let loose. The third house I knock the lady is outside looking in dismay at what is left of her car. We schedule a quick appointment for the next day. The next people I talk to schedule appointments for three different houses all owned by them only after showing me the hail they have collected in their kitchen freezer. The next three houses in a row all sign up. I’m texting Kyle their information. We getting backed up already. Over the following two hours I was able to knock out 19 new leads. By the end of the night I was still questioning if I might be dreaming.

The next day was big. I woke up early and got out and up in the hood early. People were everywhere all clearing out from the damage of the storm and I was able to talk with all of them about the catastrophe the happened the day before. I didn’t eat lunch that day. I just worked. I remember take short moments for a reality check throughout the day to find that I had forgotten where I was. By the end of the day I had generated 30 additional leads. Financially, that was the best day of my life and I can now see why there are storm chaser across the country.

Now its two weeks after the storm. Thing have slowed down quite a bit but I am still out there punching away. I got my own business title last week- VentureExpansions and we have moved into the tree timing business and I have already sold three different tree projects to two different tree trimming companies. Three people have worked with me on sales projects, one of which I owe a small amount of money. Tomorrow I will meet with three grounds men who are looking to work for pay and learn the art of trimming a tree from the tree trimming guy that I met today. I am aware of how fast I am moving. The thought that this could derail at any time keeps me vigilant. The amount of damage that this could do is an exciting. Only time will tell how this little venture will affect the greater narrative.